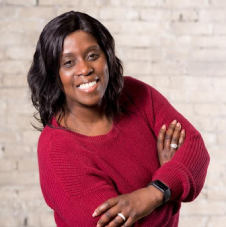 Blair Brown is an entrepreneur and an advocate for those who are marginalized, and vulnerable.  She is the CoFounder/Executive Director of the Global Merit & Essence Awards Network (GMEAN), a Not For Profit, non-partisan charitable organization committed to affecting global changes within vulnerable & marginalized communities.  Blair is also the Executive Director of the Women of Essence Global Awards, a recognition program produced by GMEAN.

After graduating from the Radio & TV Arts program at the Northern Alberta Institute of Technology (NAIT) in Edmonton, Alberta, Blair moved to Toronto to pursue her career in broadcasting. She was employed with the Brascan organization in various positions at Royal LePage and later followed her passion for community work, combining it with entrepreneurship.

Since returning to her hometown of Edmonton, Blair has founded Women in Bloom International with current chapters in Edmonton Alberta, Toronto Ontario, Phoenix Arizona, and Lusaka Zambia. Blair recently collaborated to create 16Days Bloom Hope, a movement that is raising awareness and creating change to fight Gender Based Violence Against Women & Girls.

Blair, a busy mom to a 9-year-old son, was a core member of the newly archived Facebook group YEG Response to COVID-19: a safe place for members in the community to request and receive support with their needs. Blair recently completed her tenure on the Edmonton Public School’s Multiculturalism and Cultural Diversity Policy Review Advisory Committee. She currently sits on Women in Film & Television Alberta Diversity Board where her focus is to advocate for a fair and equal representation of Black Women and Women of Colour in television and film.

Blair lives by her motto of “Helping People…Changing Lives!”